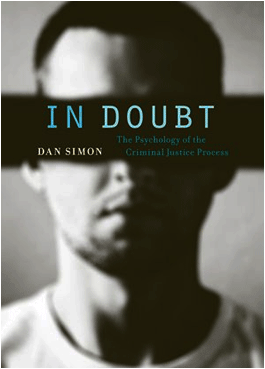 The accuracy of criminal verdicts will forever be constrained by the imperfect human cognition that makes them possible." This is the chief conclusion of Dan Simon's extraordinarily thought-provoking book that links research into cognitive science to America's criminal justice system. Simon, professor of law and psychology at the University of Southern California, brings a unique psychological perspective to the inner workings of the criminal justice system.

In Doubt: The Psychology of the Criminal Justice Process impresses upon the reader just how easy it is to convict an innocent person due to breakdowns in both the investigative and adjudicative phases of a criminal case. Simon fills the book with studies that cast doubt on what many criminal justice practitioners believe to be conventional truths about how people observe their surroundings. Simon upends these so-called truths in the process shedding light on the myriad ways in which human memories are untrustworthy, malleable by law enforcement officers, and prone to bias.

He sums up the central theme of his book by writing that "criminal investigations are prone to produce evidence that contains substantial errors, which the adjudicatory process is generally incapable of correcting." The book initially focuses on the evidence produced during the investigative phase, specifically, human testimony and its inaccuracies. It then delves into the subsequent adjudicatory phase, which, Simon argues, is not well suited to correcting the errors produced during the investigative phase.

This book should appeal to attorneys, law enforcement personnel, policymakers, academics, and judges not only for its superbly researched scientific explanations regarding human perceptions and how they come into play during the criminal justice process, but also for the reforms Simon suggests to improve criminal procedures. A long list of potential reforms concludes each chapter, many of which are aimed at increasing the transparency of criminal investigations. The most oft-mentioned reforms involve recording identification procedures, witness interviews, and suspect interrogations. According to the Innocence Project, 500 jurisdictions nationwide, including the states of Alaska, Minnesota and Illinois, regularly record police interrogations. Simon seeks to build on these states' initiatives to encourage policy makers and law enforcement personnel to adopt recorded interrogations and witness interviews as best practices.

Throughout the book, Simon skillfully links scientific studies on memory and human behavior to false confessions, identification procedures, and witness observations. For example, Simon references studies indicating an inverse relationship between a witness' recollection of the peripheral details of a criminal event and an ability to accurately identify the crime's perpetrator. This finding is at odds with prosecutors' training, which encourages witnesses to include minor details in their testimony to lend credibility to their identification of the perpetrator's facial features.

He also points to studies finding that eyewitness confidence was a stronger predictor of jurors' decisions than the accuracy of their identification. Particularly poignant are actual in-court witness identifications such as, "I will never forget the face," "He raped me," and "I still stand strong. No one was in that dark alley with me but Jesus and this person. There is a certainty, sir, and I am standing on that." All of these witnesses who confidently identified their perpetrators in court with the statements above have one thing in common: they identified defendants who were convicted at trial and ultimately exonerated based on DNA testing. Simon explains how so many witnesses can be wrong about what they perceived by discussing cognitive errors humans make when they attempt to recall past events, including inaccuracies in identifying perpetrators of crimes due to: witness stress, presence of a weapon, source confusion, own-race effect, and successive viewings of a person's picture through the course of an investigation and trial.

Also intriguing are Simon's observations regarding the complicated criminal jury instructions jurors are expected to follow such as requiring jurors to: suppress thoughts after a judge reads a curative instruction; disregard evidence after it is ruled inadmissible; and admit evidence for limited purposes. Simon points to a study conducted in England where only 31 percent of respondents understood the judge's instructions, while two-thirds of them stated that they grasped them correctly. The studies of jurors in capital cases are even more enlightening; juror comprehension levels of one state's death penalty instructions was only 55-60 percent which is just slightly better than guessing.

One of the few shortcomings in the book is the small number of details from actual cases. Simon's inclusion of details from the wrongful conviction of Ronald Cotton add a layer of realism to the book, and his arguments would likely be even more compelling if he included additional examples of not just where the system breaks down, but, specifically, whose lives these breakdowns affect.

Simon, as he hoped to do, certainly reenergizes the debate about the accuracy of the criminal process by challenging assumptions many actors in the system possess regarding its reliability and raising questions about its long-term legitimacy.

Lauren-Brooke Eisen is a former prosecutor who works for a New York City-based nonprofit, where she focuses on criminal justice policy, including writing about trends in legislation.